The painting Entent Cordiale currently on display in Breed: The British and their Dogs seems all the more poignant today following British prime minster David Cameron’s EU referendum speech yesterday. The painting was commissioned to commemorate a series of political agreements between France and Britain in the early 20th century. It depicts an English and French bulldog, both British breeds.

If you haven’t already seen the painting or the exhibition pop down to Manchester Museum tonight for our Breed After Hours event. The event is free and starts at 6pm, you’ll be able to explore the exhibition, meet some real life dogs and their breeders, and Manchester University academics currently researching the history of British dog breeding! For further details visit http://www.museum.manchester.ac.uk/whatson/exhibitions/breedthebritishtheirdogs/

Last Wednesday Breed: The British and their Dogs finally opened. All those who attended, both canine and human, were captivated by the fascinating stories, wonderful objects and stunning graphics. Dog breeders from the Manchester Dog Show Society and beyond very kindly brought a selection of pedigree show dogs to meet visitors in the flesh. Rocky the bulldog was the star of the show winning the affection of the majority of visitors with his loveable personality. 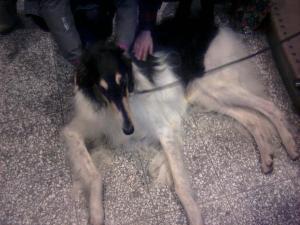 Borzoi at the opening of Breed.

However, visitors were equally as intrigued and pleased to meet the other five breeds including Pekingese, borzoi, and the final three focus breeds I’ve yet to blog about, namely the Irish wolfhound, collie and bloodhound. These three breeds have enthralling histories associated with nationalism, colonialism, industrialisation and criminology! They typify and illuminate changes in British society over the past two centuries just as the Pekingese, borzoi and bulldog do. 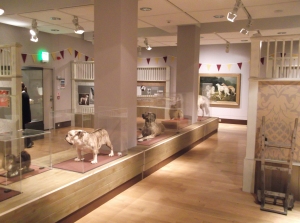 Breed: The British and their Dogs. Manchester Museum. The University of Manchester. 2012.

If you missed the opening do come along to the Museum this Saturday as the dogs and their owners will be back. They’ll also be several other dog orientated events going on throughout the day so don’t miss out.

Over the past several months I’ve been working closely with colleagues from the Centre for the History of Science, Technology and Medicine, the University of Manchester, to produce our latest temporary exhibition Breed: The British and their Dogs. This fascinating exhibition is a cultural exploration of  pedigree dog breeding, a phenomenon which began in 19th century Britain, and focuses on the captivating histories of six specific breeds.

With only four weeks to go before we open on Saturday 6th October objects are beginning to arrive from a whole host of generous lenders including museums, libraries, and dog breeding clubs. The exhibition combines a wonderful array of objects including decorative art, social history and natural science. There will be over one hundred objects on display, each of which illustrate the enduring and affectionate relationship between Britons and their dogs.

The bulldog holds a particularly prominent place in British history and is one of the six focus breeds. It has been portrayed as both sinner and saint over the past several centuries and the exhibition charts this variable status. Salford Museum has very kindly loaned us a  late 19th century jug  which depicts the rather disturbing role of the bulldog as used in bear-bating. The use of the bulldog in this now illegal blood sport earned it a fearsome and ferocious reputation.

Over the next several weeks I’ll share more of the fantastic objects destined for display with you and reveal more about the remaining five focus breeds!

Error: Twitter did not respond. Please wait a few minutes and refresh this page.